© 2006 by Kathleen Kemsley, awarded first place in American Motorcyclist Association story contest and published on their website in January 2006.

Some people will use any excuse to go for a motorcycle ride.  Or at least, that’s what the American Motorcyclist Association (AMA) must think.  Why else would they propose a Grand Tour called “Up, Down and All Around,” taking you to all four corners of a state, along with hitting its highest and lowest points?  Talk about a waste of gas.  Talk about a pointless quest.  Talk about a lame pretext for a trip.

Well it may have been lame, but the idea of touching all four corners of our home 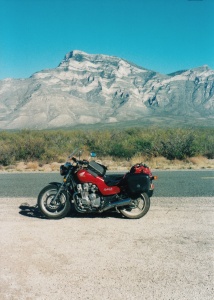 state appealed to us.  For me, it would be a good opportunity to try out the new sidecar rig I had attached to my Honda Nighthawk.  For Dina the Dog, it would be new smells and new terrain to explore.  For my husband Brian, well, he doesn’t need any excuse to go riding.  He’s already on the rig and down the driveway before he asks where we are going.

We headed northwest first, taking a “shortcut” on a dirt road which bumped over 50 miles of washboard.  My windshield shook loose, the lock broke on one of my saddlebags, and Brian had to be pushed out of some deep sand.  Finally emerging onto the highway near the Very Large Array, we camped nearby and fortified ourselves with breakfast burritos and Pietown pie the next morning.

Then it was a hundred miles north on a road devoid of even one shade tree.  By the time we reached Shiprock, the state’s northwest corner, the temperature was 102 and I would have traded my front tire for a glass of ice water.

After a sweaty stop to snap a picture in front of the Shiprock Chapter House, we pointed the rigs east and headed for the mountains.  I followed Brian up the curves on the High Road to Taos, dividing my attention between breathtaking 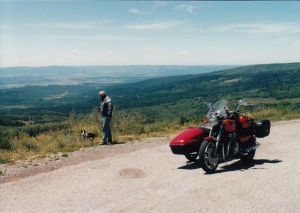 vistas and drop-offs to the right, and the art of shifting my butt to the left as I negotiated the sidecar rig around yet another decreasing-radius turn.  Slowly but steadily I gained confidence in my ability to handle the rig.  Brian shot ahead of me, but he and Dina waited for me at an overlook with a couple of folks riding two-up on a Harley.  The aspen leaves shimmered green in the July sun, and the view went on forever. 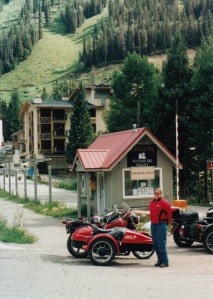 We rode up to Taos Ski Valley, a picturesque hamlet nestled on the slopes of the state’s highest point, Wheeler Peak.  Unfortunately, the road itself did not run very high up the mountain.  Shrugging, we took pictures of the ski runs and hoped that would be good enough for the AMA.  A brief afternoon rain shower cooled us on the way down the mountain, and Mexican food that night with my brother-in-law completed a satisfying stay in Taos.

Touching the next corner of the state entailed riding part of the Enchanted Loop east of Taos, then heading out along a portion of the Santa Fe Trail into some empty country.  I think I saw more snakes on the road than I saw vehicles.  Moses, the northeastern most point in the state, was nothing more than an 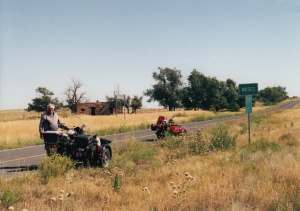 abandoned farm – the road didn’t even widen on the approach.  We gathered photographic proof of our visit to Moses, then followed the Santa Fe Trail back toward home.

Due to some inconveniences such as work, chores, and cash flow, we did not resume the Up, Down and All Around Tour until October.  Fortunately, temperatures along the southern border of the state had become downright pleasant by the time we set out to touch the southern two corners. Here’s some advice for anyone curious about checking out the remote Mexican border crossing at Antelope Wells: bring extra gas.  We traveled as far as 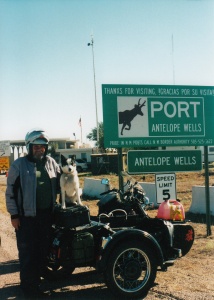 Hachita and found two gas pumps, both out of order.  A check with the Border Patrol, more plentiful than yucca in that part of the state, confirmed my suspicion that there was no gas to be had at the border, either.  The sidecar rigs being the gas hogs that they are, we chose the better part of valor and turned around.  As close as we lived to this corner, we decided to skip it.  A week later, we returned with a couple of extra gas cans to finish the ride.

The last corner was the most difficult to find.  Reaching Jal was easy enough, just 60 miles or so past the state’s low point at Red Bluff Lake.  But Bennett 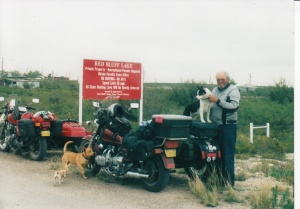 appeared to be a ghost town, not marked on any map.  A local man gave Brian directions to go three miles south and “you can’t miss it,” which turned out to be local-speak for “you’ll never find it, stranger.” After wandering around for awhile, we finally followed a dirt road into a small settlement consisting of a half dozen houses.  Yards overflowed with goats, donkeys, and chickens, but not one human being was in evidence.  I thought I heard the theme from “Twilight Zone” playing in the background. No signs announced Bennett, so we photographed a sign indicating Bennett 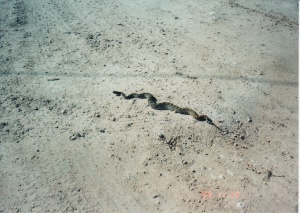 Street, again hoping this would please the AMA.

On the way out of the settlement we were halted by another creature on the road: a four-foot-long rattlesnake.  Brian jumped off his rig to snap a quick picture.  The flash of the camera stirred the snake; it shook its tail ominously while retreating into someone’s yard.  Dina wisely stayed in the sidecar.

There was to be one more “wildlife” encounter on the way home from Jal.  At a turnout near the Waste Isolation Pilot Plant site, Dina and I went to water the weeds while Brian shut his eyes for a few minutes.  Suddenly, an eerie humming sound approached.  “Duck!” I shouted to Brian, as several hundred Africanized bees headed toward us from the direction of the buried nuclear waste.  Dina dove under the sidecar.  Michael Crichton’s science fiction book, Prey, flashed through my mind.  Its plot involves a swarm of nanoparticles that develops intelligence and attacks human beings.  But in this case, the bees made, well, a beeline for something south of us and moved past harmlessly.

Once finished going Up, Down and all Around New Mexico, I studied the list the 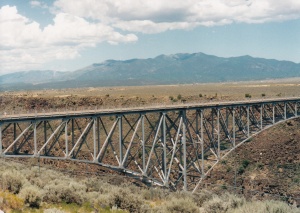 AMA had sent us for the tour.  Apparently you can tour the corners of as many states as you want.  They listed exotic-sounding places like: Teec Nos Pos, Arizona; Yaak, Montana; and Shivwits, Utah.  Hey, who said this tour was a dumb idea and a waste of gas?  I suggested that maybe we could touch some of those corners next year. Dina the Dog wagged her tail agreeably.  And Brian was already on the rig and down the driveway.

3 thoughts on “Up, Down and All Around New Mexico”