It’s the standard greeting of RVers everywhere.  But it doesn’t mean only what it says.  They can look at your license plate and know where you are from.  It’s just that they have a need to know so much more.

You can see their insatiable curiosity coming from a mile away.  As soon as you pull into a campground, they will come out of their tin castles and feign polishing a headlight or sweeping the artificial turf square in front of their doorway, so that they can cast surreptitious looks your way.  You can almost hear the numbers crunching in their heads.  Calculating: Is his rig bigger than mine?  Does he have more bells and whistles?  Is his spousal accessory younger?  Prettier?  Has she got a richer daddy than mine? It’s a regular Keeping Up With the Jones on wheels.

Next they come ambling over – usually when you’re still in the midst of raising the roof of your camper, taking chairs and tables out of the rig, placing blocks under tires to make the bed level.  The man – for some reason  it is almost always the male half of the RV couple – will walk around behind your truck, glance at the plate, and utter The Question.  Where ya from? 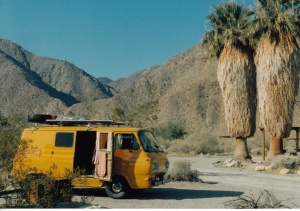 Back in the old days, we used to travel the United States and Canada in a 1964 Ford van painted school bus-yellow and sporting Alaska plates.  There were times when I fervently wished we could change them for less attention-getting plates from Iowa or something.  No one knows where anything is in Iowa.  But, we learned, everyone thought they knew all about Alaska.

“We went to Alaska – took a cruise up the Inside Passage,” was the most common way people laid claim to a knowledge of the 49th state.  Well, in my opinion the Inside Passage, which only covers the southeast coast of Alaska, looks exactly like what all the land just inland from that narrow strip is – Canada.  Alaska’s mainland is nothing like Southeast.  It’s about northern lights, seven months of winter, moose on the roads, thousands of loon-spotted lakes, rivers milky with glacial flour, and grubby bearded men living in plywood one-room cabins with a common law wife and an outstanding warrant in Nebraska.

“My uncle used to live in Fairbanks”—that was another way well-meaning RVers tried to connect with us sourdoughs tumbling out of the old yellow van.  “Didja know my cousin, Joe?  He was on the pipeline in the 1970s.” Alaska is a state of half a million people, spread over a parcel of land half the size of the entire continental United States.  At times it seemed like the Last Frontier was, indeed, a small town with long streets.  Still I could not keep track of these ghosts who had lived there thirty or forty years ago, Uncle John or cousin Richie.  How many people claim Alaska connections because they knew someone who lived there once?  And really, why would they think I care?

The other classic response to an Alaska license plate is, “I always wanted to go up there.”  What am I supposed to say to that?  The first thought out of my mouth is, “What are you waiting for?”  The Alcan Highway isn’t the wilderness-dirt-road-with-no-services-for-100-miles journey that it used to be the first time I went south on it.  Nowadays there’s plenty of gas stops, souvenirs, car repair shops, Overwatea grocery stores, and greasy spoon overpriced restaurants that call themselves “roadhouses.”  It’s not an “adventure” drive anymore.  It’s simply just a long haul.

Truthfully, I had never been over it in the summer time, which was when these Fair Weather RVers undoubtedly wanted to travel.  The best time to drive the Alcan really is in the winter, when the corduroy is smoothed over with packed snow and your headlights shine brightly on the snow-covered mountains.  When the northern lights blaze green and blue and white, shimmering like curtains in the sky.  When it’s so cold you can hear the tree trunks cracking.  When you invite your dog onto the bed of the van, and learn the true meaning of a “Three Dog Night.”

Fast forward a few years.  We exchanged the Alaska plate for an Idaho plate and began driving to 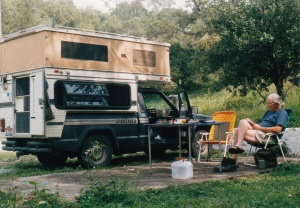 Mexico during the winters.  Do you think that stopped the vultures at the RV parks from asking The Question?  No, of course not.  It didn’t even slow them down.  Only now, instead of making ridiculous remarks about Alaska, they made them about Idaho.

“Where ya from in Idaho?”  (Polite pause, only long enough for me to mumble, “Boise.”)  Immediately they jumped in with a story about how they went to college in (fill in the blank): Moscow, Coeur d’ Alene, or Rexburg.  Or, alternately, how they traveled through Idaho on their way to (fill in the blank): Yellowstone, Sturgis, or their grandmother’s house.  If they couldn’t think of some similarly tenuous connection between themselves and my home state, their last resort was to simply repeat a cliché, such as, “Lots of potatoes there.”

After weathering a particularly tiresome assault of old guys with nothing better to do than pounce on me whenever I exited the camper at an RV park near Culiacán, I struck back and composed a song.  From then on, any time anyone asked The Question, I replied by singing, to the tune of “Camptown Races.”

Where ya from in Idaho, it’s the land of the potato.

Where ya from in Idaho, doo dah.

As time went on, I started adding verses:

Well needless to say, over the longs weeks of driving all over Mexico, I eventually  came up with a full set of 50 verses to this song, plus 10 more for the Canadian RV community.  And after that, the question, “Where ya from” no longer bothered me so much.  I’d just start humming the tune for “Camptown Races” and wandered off in the opposite direction, toward the nearest beach or mountain or panaderia.

2 thoughts on “Where Ya From?”