In the most popular national parks, swarms of tourists can be as oppressive as the heat of summer.  Many people’s memories of these places consist of fighting motor home traffic jams, jostling for souvenirs, and eating cheap hot dogs that have been on the warmer too long.  On the shoulder season, however, crowds thin, parking spaces open up, and the animals emerge from hiding and show themselves.

Now, gambling is legal in Montana, and I’m a gambling woman.  When I moved here last winter, I naturally indulged in some video poker (Jacks Or Better is my game) in the mini-casinos that grace every intersection.  I’ve also been known to bet on the ponies from time to time.  So I decided to try my luck on the week after Labor Day to hit the National Park Trifecta: Glacier, Yellowstone, and Grand Teton.

From Missoula, I first rode north alongside a three-of-a-kind of long, skinny lakes – Salmon, Seeley, and Swan.  The mountains of Bob Marshall Wilderness, towering to the east, are locally known simply as “The Bob.”  As in, “What happens on The Bob, stays on The Bob.”  Shades of Las Vegas.  I hasten to add that I haven’t any personal experience with what happens on The Bob.  At least not yet.

At Columbia Falls I turned east and headed for Glacier National Park.  For a motorcyclist, the 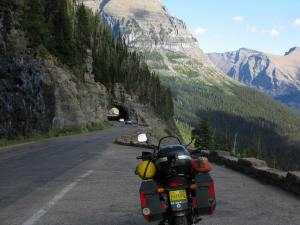 sure bet is Going-To-The-Sun Highway, which famously clings to the side of an impossibly steep mountain.  An engineering marvel from the CCC era, the road easily lives up to its reputation for narrow and winding, with views to die for.

I do not know the exact number of people who have taken their last breath sailing over the edge, but I would wager it’s a few.  Traveling from west to east placed my motorcycle in the outside lane of the road.  Near the road’s summit at Logan Pass, I glanced over the low wall along the road’s edge to my right.  Empty air gaped, 2000 feet down.  At that moment a sudden gust of wind hit me from the left.  And, well, let’s just say that I “nearly” had to change my undies.  Quite the thrill, quite the rush, the rider’s equivalent of being dealt a natural full house.  Aces and eights, dead man’s hand.

More motorcycles than cars crawled up the narrow strip of asphalt between Lake McDonald and Logan Pass.  BMWs appeared to be the most common brand, though a healthy number of Harley-Davidsons were engaged in conquering the pass also.  The people sealed inside of cars looked at us longingly.  Anyone could see this road was a motorcyclist’s run for the roses.

Camped at Rising Sun that evening on St. Mary Lake, I was busily slicing sausage onto crackers

when I looked up to see a black bear less than 40 feet away.  He was moving along the fringe of the campground.  I like to see creatures in the wild, especially when they appear to have something better to do than paw through my food.  This little guy ran right through and disappeared.  My food was locked inside sturdy Jesse bags, but it still felt a little dicey to sleep in a nylon tent that night.

Riding out the east side of Glacier the next morning, I leaned into a terrific side wind all the way down through the reservation.  The Rocky Mountain Front rose abruptly from the golden plains of central Montana like a dream, like a mirage, like a neon-lit casino 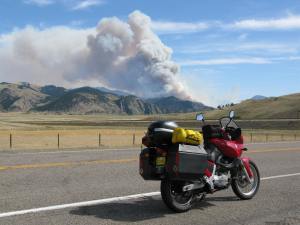 from the sands of the desert.

Presently a distraction appeared southeast of my route: a smoke column appeared against the blue sky and built into a plume.  Since I work in fire management for the U.S. Forest Service, the growing wildfire worried me.  If it was anywhere near my forest, I’d have to cut my trip short.  But as I got closer, I saw that it was on the Helena, not the Lolo.  Still, in a year that was notoriously devoid of fires, it was the biggest column I’d seen all summer.

I camped that night at a BLM campground called Red Rock, just a few miles west of Bozeman on

a lovely twisting back road.  Approaching Yellowstone from the north the next day, I threaded my way through the town of Gardiner.  On my right sat the Two-Bit Saloon, looking a little worse for wear and tear after three decades.  Back in the day, I was a college student having the time of my life working as a waitress in Mammoth Hot Springs.  Life was carefree in those days, my only responsibility being to show up at work on time.  The drinking age was 18, the Two-Bit Saloon stayed open late, and my friends and I were as wild as one-eyed Jacks.

Along the ridiculously curvy road between Gardiner and Mammoth was a special, magic place for which I now aimed the front tire of my bike.  Only now, in 2009, Boiling River was no longer a secret that only the park employees knew about.  After having been trampled and run down and eroded, the spot was rehabilitated and regulated in the manner for which the National Park Service is famous.  A parking area a quarter mile down the road had been built, and a well-marked trail followed the Gardner River upstream to the site we used to stumble down a steep hillside in the dark to reach.  (Author’s note: this is NOT a typo.  The town is called Gardiner but the river is called Gardner.  Go figure.)

Ah, but Boiling River itself was still a world-class free hot spring, and my favorite in the whole 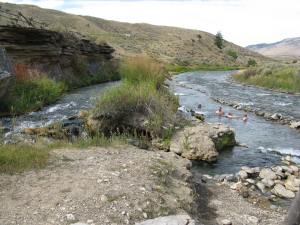 world.  The hot creek fed by the Mammoth Terraces burst from the hillside and tore down to mix with the cold, clear water of the Gardner River.  At their juncture, a motorcyclist tired from 300-plus miles ridden the day before could position herself underneath a thundering hot cascade and receive a straight flush of hot water to massage sore shoulders.   The odor of sulfur was heady, seductive.  The view downstream to sagebrush-and-juniper-clad hills was spectacular.  Ignoring the handful of fellow tourists nearby, I leaned back against a rock, raised my face to warm sunlight, and soaked until my skin pruned.

After my soak, I rode up to Mammoth Hot Springs Hotel, to find myself in the midst of a genuine elk jam.  A huge bull elk, antler rack splendidly displayed, urged his harem of 20 cows across the hotel lawn.  Park rangers used cones and megaphones to move people out of their way.  I watched the show from the window of the restaurant where I used to work.  The bull elk was

larger than my motorcycle, and I figured it was even odds whether I could actually outrun it.  Especially if it was protecting 20 girlfriends.   Exiting the building at the rear, I cut behind the old boy’s dorm, rolled the dice, and made a successful dash for my bike.

Temperatures dipped below freezing at Indian Creek, the campground where I stayed that night.  In the morning I was thankful for the BMW’s heated handgrips as I made the ride on a gorgeous curving road past lakes and mountains to beat the tour busses to the Norris Geyser Basin.

Norris is less visited than its sisters to the south, but is every bit as spectacular.  With no company save the cheerfully erupting geysers, I followed a boardwalk out past the Ledge Geyser to reach some algae-laden streams colored the same bright green hue as a blackjack table.  I passed a noisily bubbling pond aptly named Crackling Lake, and went the long way round to reach Little Whirligig, the cutest miniature geyser around.

My next stop on the Yellowstone circuit was the obligatory gawk at the Grand Canyon of the Yellowstone River.  I rode along a one-way road, parking my bike in a nearly-empty parking lot to walk to Grandview Point.  The canyon always looks stunning, but slightly illusory.  How could 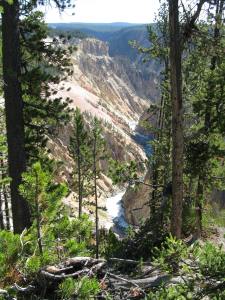 those colors be real?

Restless, like a gambler on a losing streak, I felt an urgent need to move on.  The lower geyser basins were calling and I could deny them no longer.

Old Faithful was gushing as I rolled off the cloverleaf at most famous attraction in Yellowstone.  But there are other geysers more faithful than Faithful, bigger, more frequent, so I didn’t bother to wait for it to go again.  Instead I wolfed down an Old Faithful Inn chicken burger and headed north, betting on the come that I would catch an eruption of one of the less famous (and less crowded) geysers.

Sure enough, I hit a modest jackpot when I pulled up to Great Fountain Geyser.  It agreeably sputtered, then shot into blue sky in a graceful plume three stories tall.  I scored another win at Firehole Lake when I parked my bike in a lot absolutely empty of any other vehicles, and had the place to myself.

And my third stop was a charm: I got to visit my best old friend, my favorite thermal feature in my favorite national park: the Grand Prismatic Spring.

Kurt Cobain’s line in “Aneurysm” came into my head: “I love you so much it makes me sick.”  As I breathed 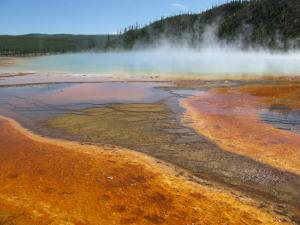 deeply of the sulfur, the steam, the brilliant rainbow colors, the delicate bright algae and bubbling water, I knew exactly what he meant.  Suddenly I was transported back one year in time.  The previous September, while I was preparing for a different motorcycle ride, a piano fell on me.  An infection started, spread, slid into my bloodstream.  One day I was running my customary six miles and packing my saddlebags; the next day I was in the Intensive Care Unit, fighting for my life, as my organs failed and my systems shut down.  I came closer than I’ve ever been to cashing in my chips and joining the Big Poker Game In The Sky.

Floating for days on a hazy morphine cloud, barely hanging on, I lay in the hospital dreaming of this place – Grand Prismatic Spring.  Now fully recovered from septic shock, I stood at the place which had sustained me through the darkness.  My stomach wrenched remembering how near to the finish line I had drifted.  There may have been a few tourists on the boardwalk but I didn’t see them through the tears of gratitude that filled my eyes.

I waved at tons of motorcycles the next day as I wended my way south from my campsite at Lewis Lake into the little sister of Yellowstone, Grand Teton.  It was a first class ride with yet another spectacular view around each curve.  The paved road glided past the startling silhouette of sharp, craggy peaks which reminded the early explorers (who obviously had been away from the comforts of home for way too long) of breasts.  In my opinion the Tetons looked more like

wizard caps than women’s breasts.  But you see what you want to see, and I’m sure the name appealed to those lonely guys – gamblers all – who had taken the chance of exploring the unknown instead of staying home where it was safe.

An antelope jam gave me an excuse to stop along the park road.  It was then that I noticed, snaking through sagebrush beneath the towering peaks, a beautiful, smooth asphalt bike path that paralleled the road for miles.  So I promptly shed my riding gear, donned shorts and a jog-bra, and treated myself to an hour-long run beneath the magnificent peaks of the Teton Range.

Buzzing on a runner’s high, I reviewed the whole thousand miles I had just ridden, through the National Park Trifecta.  It was a blanket finish for the three most beautiful places in the Northern Rockies.  But in the final stretch, it was perennial favorite Yellowstone on the nose to win; wild, beautiful Glacier to place; and iconic Grand Teton in the money to show.  And I went home a winner.