Tired of dodging clumps of tourists in Golden Canyon?  Weary of trudging the over-interpreted ruins of the Harmony Borax Works?  Bored with the sameness of the dunes at Stovepipe Wells?  For anyone who has become jaded from too many treks to Death Valley National Park, there exists a gem of an alternative.  It’s the region which lies just to the east: the Amargosa Valley. 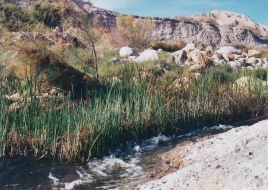 Sparsely populated and seldom visited, the Amargosa region encompasses the reach of a river which mostly flows underground.  Nicknamed “The Hide-And-Seek River,” this 60 mile long waterway makes appearances only sporadically along its course.  The river is a fragile jewel in the desert. Las Vegas, the fastest growing city in the United States, lies just east of the Amargosa.  Developers have tapped into the underground water reserves which feed the Amargosa, threatening the river’s continued existence.

The Amargosa Conservancy, an organization based in Shoshone, California, was formed by locals a few years ago, for the purpose of protecting the river’s riparian zone.  The group staffs a visitor center in Shoshone, leads outings to various locations in the river valley, and lobbies politicians for support.  In 2009 they succeeded in securing Wild And Scenic River designation for the Amargosa, thanks to a bill sponsored by Senator Barbara Boxer (D-Calif.).

Within the bounds of the river region, many natural and cultural marvels can be explored by RV travelers in a few days’ time.  Attractions in the Amargosa River Valley include crystal clear mineral hot springs, a wetland zone dotted with bottomless springs that are home to several endangered species, a working date ranch tucked into a remote canyon, traces of a National Historic Trail, a surprisingly well-stocked museum, a series of caves that were inhabited by miners for more than 70 years, several delightful day-hiking trails, and the stunning desert scenery for which the entire Death Valley region is justifiably world-famous. 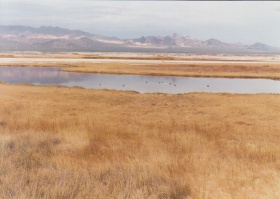 recorded history.  Minerals in the water include potassium, chloride, boron, and sodium, but none of the sulfur that gives many hot springs that “rotten egg” smell.  Bathing suits are not allowed in Tecopa’s public bathhouses; bathers must enter the water nude.  Separate facilities are provided for men and women.

Many of the people who winter in the Amargosa Valley live in one or another of the Tecopa RV parks.  Most are retired and over (some WAY over) 65, and they all swear by the fountain-of-youth properties of the hot springs water.  One woman, who stated her age to be 82, bounced up and down the steps of the hot pool with the energy of a teenager.  She related that a car accident a few years ago had broken 40 bones in her body; she was nearly immobile before discovering the healing waters of Tecopa.  Perhaps she was exaggerating, but the spry spring in her step could not be denied.

Up the road about five miles, the town of Shoshone was originally populated by a small band of Shoshone Indians.  The abundant water of the springs and of the seldom-seen Amargosa River made the locale bearable in the searing heat of one of the hottest environments on the planet.

Silver and lead mining began in the Shoshone area in 1877, attracting the first fortune-hunting outsiders to the area.  Some time during this mineral rush, or perhaps before it began, someone dug about a dozen caves out of a 600,000 year old layer of soft volcanic ash and named the settlement “Dublin Gulch.”

Miners occupied these caves continually between 1907 and the 1970s.  When one

resident died, another would move in.  Each resident of the caves added his own accoutrements: doors, wooden floors, a stove, windows.  Some of the residents became colorful “attractions” in their own right, such as Joe Volmer, who occupied a cave until his death in 1938, and was well known for his love of cold beer and the possession of a working refrigerator in his cave.

Charles Brown, founder of Shoshone and later a state Senator, never charged any of the squatting miners rent.  Therefore, no written records ever existed of who lived in the caves when.  But Brown would often stroll up Dublin Gulch, past the town cemetery, to shoot the breeze with gulch residents.

Today, a visitor to Shoshone can walk behind the gas station and see the caves.  Cave entrances are blocked by doors or fencing.  But it’s still possible to gaze through openings in the doors into the dark, cool depths of the caves on a warm day and imagine what life in the little squatter community must have been like.

Also in Shoshone, a museum small but bursting with memorabilia preserves the town’s history.  Old photographs, mining accessories, items used by women in their homes, handmade Shoshone Indian goods, and the bones of three species of mastodon are displayed in attractive cases and wall arrangements.  Though there is no admission charge, a donation of a dollar or more is greatly appreciated.

Next door to the museum, the Crowbar Café and Saloon serves big, tasty portions.  For breakfast, a Spanish omelet, served in a skillet with sour cream and salsa, will run you $7.95.  It’s a good bargain, especially compared to the price of gas across the street….which is always on the high side of $4.00 per gallon, even when it’s half that price in Baker, 60 miles to the south.

Some sweet oases await the adventurous traveler willing to venture onto the (well-maintained) dirt roads that venture into the Amargosa.  Ash Meadows National Wildlife Refuge encompasses 23,000 acres in the desert just east of California Highway 127, preserving several clear and seemingly bottomless springs which bubble up to feed the Amargosa River.

The nicest of several sites on the refuge is Crystal Spring.  A quarter-mile-long 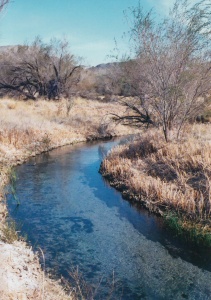 boardwalk leads the walker on a leisurely stroll out to the spring.  Interpretive signs along the way identify native vegetation and suggest geological history of the area.  One sign claims that the Ash Meadows Pupfish, an endangered species which is plainly visible in the water of the spring, “swam around the feet of mastodons.”  This fish, along with five other species of pupfish which live in nearby springs, is a rare endemic species.  Habitat destruction and competition with non-native species threaten to eliminate these remnant populations left over from the last ice age.

No round-up of Amargosa Valley attractions would be complete without a mention of the China Ranch Date Farm.  Tucked into a steep canyon just a few miles from Tecopa, the Date Farm was first settled by Ah Foo, a Chinese man who came from the Borax Works in Death Valley in the 1890s.  He disappeared mysteriously a few years later.  Since then, various owners have developed the ranch.  The current owners started planting date trees in 1990 and opened the compound to the public in 1996.

The ranch offers a gift store full of every imaginable product you could think of, made of dates.  Free samples of at least six varieties of dates tempt visitors to buy a bag or two. The home-made date bread is moist and sweet, and the date shakes are to die for.

But dates are not exactly a low-calorie food.  Ranch visitors can work off their indulgence by hiking on several trails which depart from the China Ranch parking lot.  One leads to the top of a mesa for a sweeping view of China Ranch Creek and the Amargosa River Canyon.  Another leads to a place where the elusive Amargosa River flows for a mile or more above ground in a gentle riffle of rapids among reeds.  The remains of the Tonopah & Tidewater Railroad, as well as a historical cabin, can be seen along the pleasant two-mile walk to the river.  Maps and trail information may be obtained at the China Ranch gift store.

A small interpretive sign near the entrance to the China Ranch canyon marks a fascinating chapter in western U.S. history.  This is the Old Spanish Trail, a cross-country route which was first established by Santa Fe merchant Antonio Armijo in 1829.  Following a meandering route from water-hole to water-hole, the trail linked northern Mexico’s outpost at Santa Fe to the San Gabriel Mission in California.

During the next 20 years, the trail was used primarily by a loosely knit ring of horse thieves known collectively as “Los Chaguanosos.”  These bandits stole horses and mules from the early California ranches and herded them east along the trail to Santa Fe and points east, where stock animals were scarce and valuable.  Still later, the Spanish Trail was used by gold seekers bound for California.  Once word got around about the ill-fated route of the Donner Party, many Forty-Niners opted to follow the longer, but warmer, trail that led south of the dreaded Sierra Nevada.

The Old Spanish Trail was designated as a National Historic Trail in 2002.  Today, the National Park Service administers this unit as part of a national network of 17 historical routes.  Planning is underway for future interpretive kiosks.  But for now, a faint trace of the route passing next to the paved road between Tecopa and Las Vegas is the only evidence that can be seen of this piece of American history.

plus a soak in mineral hot springs at the end of the day, the Amargosa Valley can’t be beat.  Next time your travels take you near Death Valley, consider making a detour to this little-known but extremely worthwhile destination.