My friend Margi and I decided to take a winter vacation in Yellowstone this year.  Always in the past I had traveled to tropical climates for vacations in January.  But these trips had been with 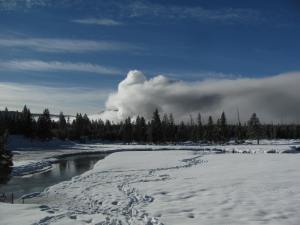 my husband, Brian, who passed away last fall.  So I wanted to do something completely different, start a new tradition, break the mold.

I met Margi in Alaska in 1985, and we have remained close all these years.  She’s the kind of friend I might not see for a year or more, and then we sit down at her kitchen table and talk like we had just seen each other yesterday.  She now lives in Helena, Montana, so I traveled there on a cold January day to begin the excursion to the park.

The ground was bare of snow south of Livingston.  We saw plenty of big mammals – elk and bison – near the north entrance to Yellowstone.  The creatures looked well-fed for the time of year.  There appeared to be plenty of grass and shrubs for them to munch on near the 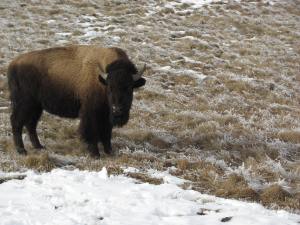 We stopped to buy “supplies” in Gardiner.  Translation: chocolate.  Some $27 later we had M&Ms, hand-dipped chocolates, truffles, mint buttons, jelly bellies, almond bark, and caramel turtles enough to hold us for a few days as we ventured into the heart of the Yellowstone wilderness.

We spent the first night at the grand old Mammoth Hot Springs Hotel.  In the dining room, I blurted out to our young waiter that I had worked there, doing the same job he was doing, back in 1977 and 1978.  He looked vaguely confused; those years were most likely before he was born.  But I had to tell him, because someone told the same thing to me when I was a waitress.  This old gal said she had worked there in the early 1950s.  And on back the history goes, back to 1938 or so when the place was built.  I liked the continuity. 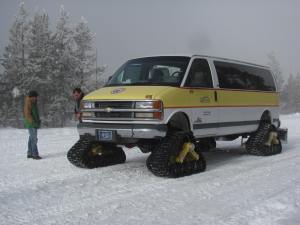 Our snow coach departed early the next morning for Old Faithful.  The trek took more than five hours, due to planned stops to photograph geysers and waterfalls, along with unplanned stops whenever we saw wildlife (red foxes, bison, and a bald eagle).  We also stopped just before Madison to help pull out a snow mobiler who had run off the road and was precariously balanced on a steep cliff with rushing water and rocks below.

Happy to find deep snow at Old Faithful, we settled into our “rustic cabin” behind the Snow Lodge, then rented some Yaak Trax footgear to fit over our boots.  We tramped all over the Upper Geyser Basin on iced-over boardwalks, pausing to watch gurgling mud pots and bubbling fountains of hot water lined with brightly colored algae.

At one point, I might have put some of my husband’s ashes in a certain hot-spring-fed waterway 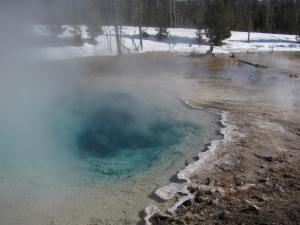 when no one was looking.  Or I might not have.  At any rate, nobody except Margi saw anything, and I trust her to keep mum.  We agreed that Brian would have enjoyed the idea of floating in the current of a warm river on an eight-degree day.

Later on, we sat near the Giant Geyser and talked for a long time about Brian.  Margi knew him well, but she didn’t know what the last few months of his life had been like.  Seeing him through the end stages of terminal illness, including hospice and enough morphine to kill a horse, had been traumatic for me.  I admitted my resentments and talked about my fears.  I also talked about the happy times and the funny things that interspersed with the difficult days of watching the cancer do him in.  As we talked, a small, unnamed geyser bubbled and spurted gently nearby.

Finally, I finished telling what I needed to tell.  As we sat in companionable silence, some 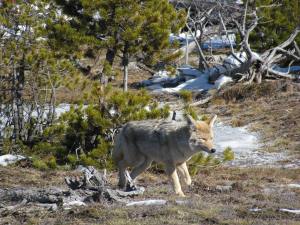 movement caught the corner of my eye.  Looking over toward Grand Geyser, I spotted a well-fed, healthy looking coyote.  Without a shred of shyness or fear, he loped directly toward us until he was less than 30 feet away.  For a moment he stopped and looked directly into my eyes.  Reflected back I saw the self-confidence of a creature living in the present.

Purposefully, the coyote moved off toward the Firehole River.  He appeared to be on a mission.  But as he disappeared, he left me with a feeling that Brian’s spirit had also been nearby.  Brian had always felt an affinity with coyotes; he had for many years worn a silver coyote pin on his hat.

I looked at Margi and she smiled, confirming what I had seen.  “That was Brian’s spirit coyote,” she said.  “We can’t know where Brian went when he left his body.  But the coyote came to give you the message that, wherever he is, he’s OK.” 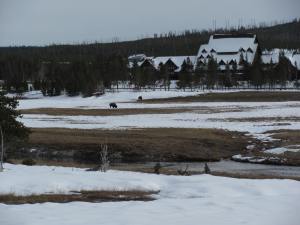 Oh Yellowstone, I thought as I watched Old Faithful Geyser erupt in the distance, you are my favorite place in the whole world.  And you haven’t disappointed me.  You produced Brian’s Spirit Coyote in the snowbound, magical world of the Upper Geyser Basin.  And you helped, more than anything else has helped, to settle me, and to begin the process of acceptance.  You let me know that Brian has successfully moved on to a better place.